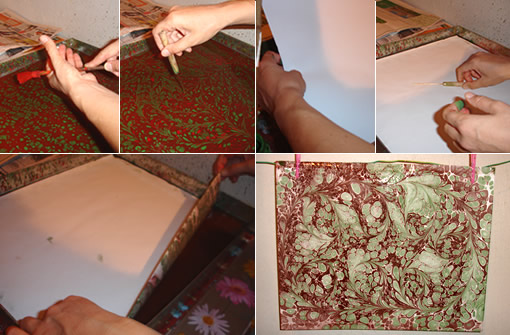 am out of town, travelling. Now, I am in Istanbul with my husband’s family but last week I was in Tokat visiting my mother and sisters. Me and my sister have started working on a new stop motion project. My sister Asuman is a graphic artist and she has been making some great “ebru” over the last year. “Ebru” is an old islamic art. Basically, it is an art form where you first paint over a tray of water and then dip a paper and get the painting. Asuman describes ebru as “the dance of colors over water” Last month, she came up with a great scenario for a stop motion film where she would be using her ebru to make set pieces. So, we have got the ball rolling. Asuman is going to build the set, puppets, .. storyboard and send me. I will be making the animation, shooting. Here is the blog site of this film: http://invasionfilm.blogspot.com I invite you to visit this blog and send us your comments as we proceed.

I also tried making ebru while I was in Tokat. Here are some pics. This was my first ebru and totally novice. I really liked doing it a lot. I wish I had couple more lifes to try all these different art forms.  Stay tuned!

By the way, I have redesigned my blog. It now looks totally different. I hope you like the new look!.