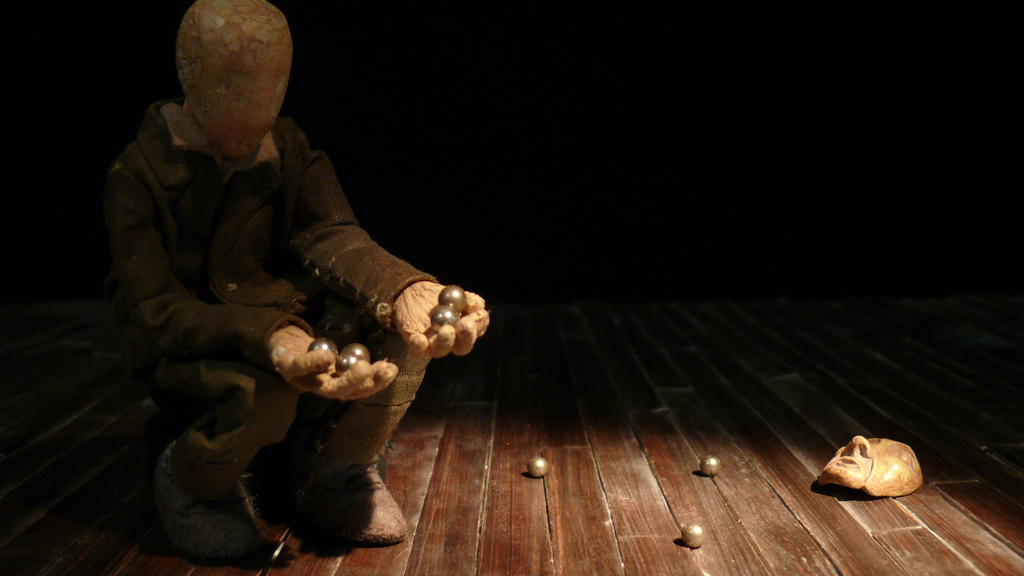 The first scene I will be shooting is Adem dropping pearls on an old wooden floor. I made the floor and did some test shots. What I wanted to have here was a shallow depth of field. Mike has been a huge help on setting up FZ50 and learning about shallow depth of field. Comment section of the previous post here filled with valuable info from him.

As you see in the above picture I have not been able to get the shallow depth of field. I need to get real closed to puppet like it is here: I am learning things about both photography and using FZ50. It is probably possible to get the shallow depth of field while puppet as a whole and pearls are visible. But I have not been able to make it. So, I tried another way. Just lit the puppet and pearls (I have not made pearls yet. The ones you see here are some steel balls for armature making) and I was able to make the floor’s back edge invisable. Still not there though. I am not totally happy with the quality of the picture… I might make some walls around the floor as I will be also animating the shadow of tree branches before the dropping occurs. I need somewhere to cast the shadows. Maybe right over the spotlight on the floor… I will see. Testing, testing…

I may change Adem’s hands too. I kind of like these big, rough hands. Have not decided yet.

(the following 2 pictures are added on feb 20th.) If you click on pictures above you can view on flickr. Both larger versions and exif data is available there. There are also pictures with some other exposure settings.

Here you see the floor and making of it: As a base, I used one of those sticky papers; the ones hanged on the wall to stick stuff. It had some texture and design, which I thought might look good for wooden texture. Washed that with burnt sienna. Cut in pieces. Glued together. Applied some talcum powder. Finishing touches with some walnut ink sent by Shelley! Later after talking to Mike, I made this floor bigger to have a little more space for shooting.

Zeynep… she is 4 now. She came to me saying that she wanted to paint wood piece too and then she decided to paint her face..

And some music time… music is a big part of my life. As a computer graphics designer, I spend most of my time either in front of computer or working on the set. There is always something playing here. I will be posting one song a post. The first one here is from Mercan Dede. (Grabbing video from youtube. No video clip to watch. Or dont even take a look at the video…) I wanted this song to be the first one as this is one of the songs tells a lot to me. Name of the song is “Kanatlar Kitabi” means “The Book of Wings” If you like it, try listening in front of the window when it is raining outside…