Niyazi Ozyurt is one of the great people I met during my stop motion adventure. He is a professional stopmotinist applying his extensive experince and educational background to create inventive films. His studio is called Maara Animation based in Istanbul Turkey. He and his team created many of both commercial and noncommercial films. They are young and enthusiastic people devoted themselves to create stop motion films.

This is how they describe their approach: “Tracking the footsteps of Hayali* in our culture, Maara creates projects that we write, draw and design. (*Hayali: Shadows play artists are called Hayali. These people create their own imaginary plays, stories and puppets, and animate them.)

They have been working on a 3D-stopmotion TV series. The other day I received an email from him saying that the trailers of T-BOT are on the website. I was totally amazed by the creativity and quality. Everything… models, set design, puppets and animation are all perfect like their other films but this time it is in 3D! If you have 3D glasses handy, try putting those on and watching trailers here: http://www.maara.tv/maara06_eng_video.html Making of photos are also worth to see telling a lot about the process: http://www.maara.tv/maara06_eng_foto.html 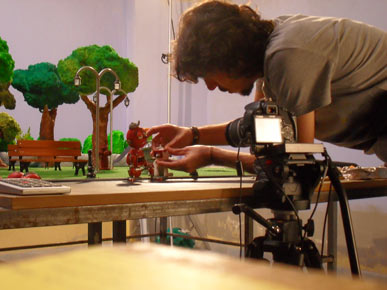 Congratulations Niyazi and Maara Team!!! Me and also my little girl Zeynep are your fans here wathcing your wonderful films..